[MAY2020] “Leafing Out” is the wonderful time of the year when the forest turns lush and green, as the trees manifest the leaves they have been saving up as buds for many months. The fresh new “leaves” in the picture at left may look more like needles… and they are… but they belong to the Tamarack (native cousin to the European Larch, also prominent on the property) which has the unique distinction of being the only Canadian conifer to shed all its needles each autumn.

In late March we were teased with some balmy days and it seemed like spring would be an early one. As things turned out, it was the opposite and coolish weather (and the woodstove heating season… we got down to our last row of firewood) dragged on well into the month of May, which treated us to overnight lows below-freezing, a couple inches of snow in the second week, and then hot&humid in the second-last week.

View of pond showing Trembling Aspen and Larch, which are first in the leaf-out parade. 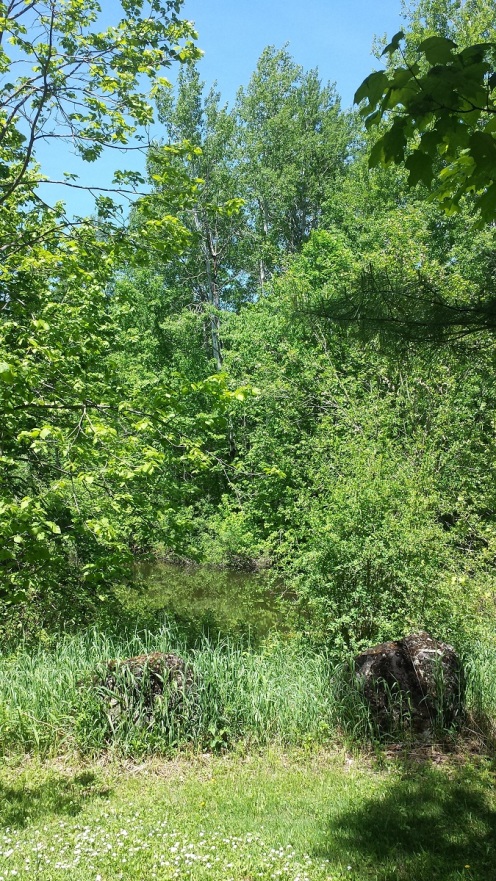 The brief hot period seemed to be the final button needed to be pressed for the trees to leaf out, and they did so fully and quickly, as if they were waiting-to-burst and now suddenly on growth catch-up.

The guest cabin has also sprouted its annual new growth on the living roof. Though, with the current pandemic regulations, there will be no guests living in there for a while because it is currently forbidden to accept leisure bookings for short-term rentals (e.g., airbnb). But once the regulation has been relaxed, and it is safe and practicable to do so, the booking calendars for both the guest cabin and yurt camping will be opened up for the summer through labour day. There will be a few changes from previous years: breakfast will be brought to you (guests used to have the option of joining us in the house), guests will not have access to shared spaces in the house, and I will be managing the booking calendar to ensure a minimum of 5 days unoccupied in between guests.